Well, we can officially cast our clouts now – May being over and out. Though (as any fule kno) that’s really about Hawthorn blossom – but then that’s gone too. My dear wife was trying to paint the outside of our wooden conservatory a few days ago, and gave up because the blossom from a nearby Hawthorn tree was blowing down and becoming embedded in the paintwork.

Anyhow, June will open in the morning. This has apparently been the third warmest spring since the Fall of Constantinople in 1453 (or something like that) – although also wetter and duller (as in, less sunny) than average. That comes as no surprise, having battled with inconstant weather all month. Last Friday I was  sheltering under a hedge as the torrential rain poured down on my efforts to weed the fruit garden at The Manor. Today, at the Manor again, I had suncream on as I raced the clouds to get the mowing finished. The coming week will be wet and unsettled apparently, so the grass at The Manor – and elsewhere – needed to be cut yesterday and today, or risk waiting several days. In which time, of course, it would have grown even more, and become even harder to cut with any finesse.

The Manor has many grassy areas, but two of them I regard as ‘lawns’ in the formal sense, deserving of special care and attention. The others – alongside the stream, behind the barns, in the orchard, and ‘over the river’ – are kept a little longer, and have a slightly raffish air compared to their neatly clipped and striped neighbours. 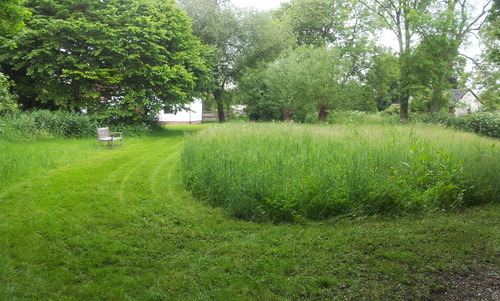 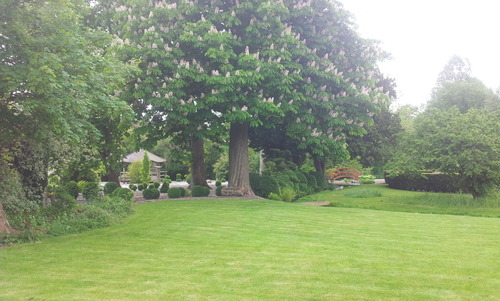 Looking towards the Oriental garden, one of the grass areas running alongside the stream. 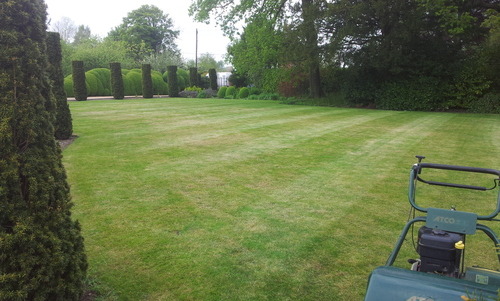 One of The Manor’s two ‘formal’ lawns

Mowing has become easier now that all the bulbs in the orchard and elsewhere have died back. For a few weeks, negotiating clumps of naturalised Narcissus and Bluebells has required extra time and manoeuvre. When they’re in flower it’s absolutely worthwhile, but it becomes simply a bind when they have stopped flowering, but the foliage is still green and doing its job of feeding up the bulbs for next season. Happily, from now on, having first strimmed the over-lengthy patches to get them under control, the mower can take straighter lines.

Today I found myself talking to my mower at one point, urging it on as it coughed over a slightly longer patch of grass. Like a ploughman and his (usually ‘his’, I imagine) team, my only company for most of the working day was the mower, and it needed the encouragement.