Alan Titchmarsh caused a bit of a brouhaha yesterday when he commented on a new RHS report about young people and horticulture (http://www.bbc.co.uk/news/education-22516087). Gardening, he was quoted as saying, is not just for the ‘thick and the dull’ – a perception which prevails out there, apparently.

I was reminded of two things people say to me a propos my work as a gardener. Firstly: something along the lines of ‘what did you do before you became a gardener?’, or ‘you’ve obviously not always been a gardener…’. This latter comment I think reflects my modest physique and weak tan, I tend to assume… I don’t wander about with a straw in my mouth, and string holding my trousers up. I read The Guardian and speak with an accent something akin to RP. Does that mean I must be a refugee from some other trade (or, should I assume, profession)? As it happens I am, but the reasons why I am now a gardener are very complicated.

Secondly. the assumption – particularly when I meet people socially, away from their gardens – that I am (surely, must be) a Garden Designer, Landscape Architect or some such. Again, the underlying feeling is that ‘someone like me’ (whatever on earth that might mean) cannot be merely ‘a gardener’. In fact that is what I am. I am just a gardener. I garden, I help people to keep their gardens looking nice, and I help them to make their gardens better if they want me to. I spend most of my time weeding, mowing, pruning – working (shock, horror) with my hands. That is what I am good at, that is what I am (belatedly) qualified to do, and that is what I enjoy.

If I do any ‘design’ it is making planting schemes and plans, and some basic garden DIY work – edging, paths, fencing – but I don’t especially like it. I have spent time managing building projects, liaising with other trades, sorting out numerous problems along the way – and that is not what I want to do now.

I am interested in Garden Design, and – who knows – one day I might decide to develop that side of my work. But for now, I am strictly a secateurs and trowel, seed tray and watering can, merchant.

There really should not be any need to apologise for being ‘just a gardener’ (sic)- but, and Alan T has clearly hit a nail on the head here, it seems people think there is.

Busy, busy. The arrival of not-so-much Spring but early Summer has meant a sudden burst of activity for me. Everyone’s lawns suddenly need proper attention all at once, as do flowerbeds, now full of dandelions and emerging bindweed. As weeding is one of my great pleasures in life, this is no hardship: hours spent on one’s hands and knees rootling out pernicious blighters like Ground Elder are hours profitably and enjoyably spent. A well-weeded border, with clean brown earth in between the plants, is a real joy to behold: and to create one, from what was previously a mass of undifferentiated foliage, is deeply satisfying. As ever, I eschew the  long-handled hoe, in favour of my trusty Japanese Razor Hoe: the one truly indispensable tool in my bag. It’s a hands-and-knees tool, but none the worse for that: precision weeding is what it offers, and that is what I like. Every day one finds the odd seedling in among the weeds, which warrants rescuing and transplanting: and you only see the free plants when you are down at their level.

I have rearranged the ‘working’ areas of the back garden at home, getting all the plants I am growing-on down to the paved yard outside the back door. There I can keep a good eye on them – whereas their old place, at the bottom of the garden by the sheds, was too easy to neglect in poor weather (I am thinking of last summer, in particular). Neither spot is especially well-lit, but there’s enough sunlight in the early morning and afternoon to keep things growing happily. It also means that this area by the back door – visible from the kitchen and dining room windows –  is nicely populated with plants, without having to bring in lots of pots. Properly planted pots can instead go in sunnier and more ‘public’ spots around the garden.

Two or three new jobs have come my way as well as the rush of work for existing clients. I have a lovely garden at a large Edwardian house to sort out for a start. There is some really good planting, as the owner was a keen gardener in her day – but it’s become a bit ramshackled as she has become elderly. Still, getting the good stuff out from under, and disposing of unwelcome invaders, will be good work.

Another client has asked me to take on his garden and ‘make some sense of it’. It is indeed a hotchpotch of plants, paths, sheds and the rest at present. But the surrounding (‘borrowed’) landscape is full of mature trees and edge-of-the-town rurality, so I want to pick up on that: as well as creating a practical and beautiful space for adults, children and dogs.

Mrs J – an existing client – has asked me to move on with ‘part 2’ of the replanting of her back garden: creating more planting space in a west-facing border, and planting a damp, shady area under some large trees at the far end of the plot.

So those jobs need fitting-in somewhere in the working week… the first two I will embark on over the next few days, as they need a good burst of activity first, and I need to get a feel for the gardens by spending some time in them

Last weekend I visited Wakehurst Place with my family and some friends who live nearby. A fabulous garden, wonderfully laid-out, and very informative. The Children’s Guidebook is especially good, making – as it does – plant hunting into a real adventure, and inviting children to come back in different seasons to see the full range of plants. The Millennium Seed Bank displays were also great: my son was fascinated by the one million orchid seeds contained in a small phial – a few feet away from enormous double coconuts. We also loved the raised beds outside containing ‘samples’ of endangered and marginal habitats and their plants – water meadow, cornfield, mountain top, downland and others.What a great place to engage children with the wonder, excitement and infinite variety of plants. 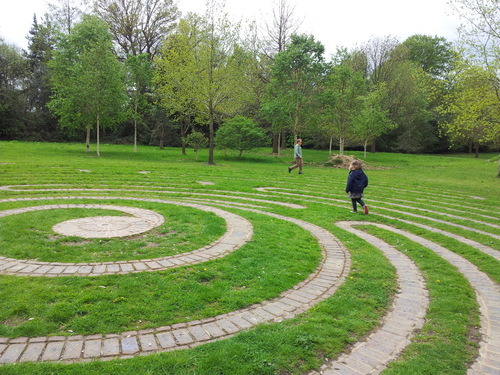 The Labyrinth at Wakehurst Place contains more bricks than the average house, and is 600m long.

And, on top of a thoroughly splendid weekend with old friends, the lovely K has asked me to come up with some ideas for their new garden. So yesterday morning was spent taking copious photographs of what is already there, and talking to her about what might work instead. It will be a shame to remove what appears to be a comprehensive collection of Euonymous varieties, but only a very, very small one. The garden is surrounded by a fantastic brick wall – built in the 1830s, from bricks which are about half as big again as modern ones, presumably pre-dating later mass production, when local bricks came in different colours and sizes.

That weekend away meant that the Gardener’s wife and I did not get to the Malvern garden show, as we keep promising ourselves that we will. She actually hankers after Chelsea more than anything, which we will do one day. Watching Malvern on Gardener’s World on Friday night, it looked a blustery and damp affair – so maybe next year?

There is such a lot of green in the garden now, what is needed is some more colour, as the Bluebells and Tulips start to fade. It won’t be more than a few days until the Aquilegias get into their cottagey stride, and some blue Centaurea, perennial Papavers and Digitalis are almost there too. 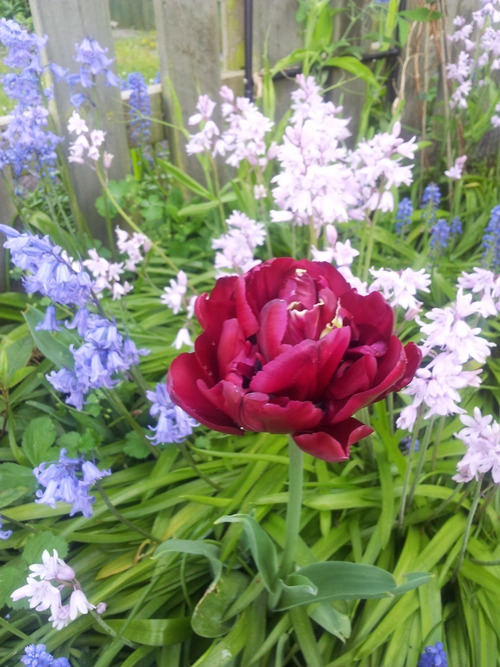 There are spring-sown Broad Beans (The Sutton) in the ground at the allotment as well, at long last. Nothing else as yet though. The east-facing ground is still too chilly for seed-sowing. Young W, however, has a fantastic crop of radishes (French Breakfast) coming on in a trough in the garden.

And there is loads of rhubarb. I took some as a gift for our hosts at the weekend, which D cooked with orange zest and cardamom pods – absolutely delicious with some thick cream. Plenty more where that came from…