In my last post I mentioned that I had taken on a new client in the Dorset village of Sixpenny Handley. Yesterday was my first day working there.

The drive over from Salisbury is a lovely one. Climbing up from the water meadows of Salisbury onto the downs where Dorset, Wiltshire and Hampshire meet and mingle, there is a feeling of entering a more ancient landscape. The main road, heading towards Blandford Forum, passes the Roman Villa at Rockbourne, numerous barrows and burial mounds, and some well-preserved field-strips. It is bleak up there, on the northern edges of Cranborne Chase, past Pentridge and Martin Down. And never bleaker than on a day like yesterday, when a truly wicked north-easterly wind was slicing over the tops of the downs.

The garden needed a reasonably extensive tidy-up, and I spent some time pruning and tying-in climbing roses and a vine to their wire supports on the house wall. I am a great fan of ‘Soft Tie’ – wire covered in a flexible rubbery coating – which is strong, highly versatile, and best of all its cushioned covering doesn’t cut into the shoots and branches as they are secured. Better still, my local discount DIY shop always seems to have loads of it at rock-bottom prices. Other roses were given a good prune and a generous feed with Vitax Q4 too, as the soil is very poor. In more than 5 hours’ gardening I didn’t see a single earthworm in the soil, which concerned me somewhat. They may have buried down deeper because of the cold, but I suspect that their absence is a sign of very low fertility in the chalky, cold soil. I will recommend that we get a load of manure delivered and give the flowerbeds a really good mulch to start restoring some goodness.

Thinking ahead to replanting and developing some of the garden, the weather yesterday gave me a very useful insight into the extremes of cold and wind that the garden experiences. The client told me that in summer it can be just as windy, but bakingly hot – there is not a lot of shade, beyond that cast by the house and fences – no large trees to provide dappled shade on a sunny day. Quite a challenge, then, to find plants which will tolerate (more than tolerate, positively enjoy) such conditions.

There is also a very low, downhill corner to the garden, which gets little sun and gathers water draining off the rest of the garden. It might make sense to put a pond in there, or at least make a bog garden to take advantage of the natural dampness.

Back at home, and thawed out a bit, I had time to check on my plants in the conservatory and greenhouse. Seeds sown over the past couple of weeks are doing alright, and some – Tomato ‘Terenzo’, Blue Beans, Sunflowers – are already big enough to want pricking out sooner than later. Similarly, quite a lot of plants in the greenhouse want to be making their way outside. The trouble is that the outside temperature is so low that normal hardening-off is not really an option just yet, as I think the shock of even daytime temperatures and wind-chill, might be too much. So I will try to keep them going under cover a little longer, and hold off sowing too much more until things warm up a bit. It feels like Spring is going to be about a month late this year, so there is still plenty of time.

Finally, I was lucky enough to pick up some ‘unwanted’ Buxus bushes through our local Freecycle plant exchange. The owners had dug them out and didn’t want to throw them away if they could be found a good home. So I asked if we could have them for Wyndham Park School’s garden – and they agreed. Seven substantial and really healthy Buxus, each about three feet tall, are now heeled-in, waiting for me to plant them in the Library Garden. They will make a nice feature in the ‘Explorer’ garden, with its developing array of hardy shrubs and grasses amongst which the children can make trails and play hide and seek.

A strange couple of weeks it has been. Yesterday (17th March) we had the most spectacular snowfall – literally, the fall. Huge flakes, an inch or more across, drifting down in slow motion throughout the morning. Nothing stuck, as the previous day had seen torrential rain (the wettest day of 2013 – so far) and the ground was soaked and warm-ish. But beautiful, storybook snow. It reminded me of another St Patrick’s Day, when I was in New York, watching endless marching bands and majorettes shivering up 5th Avenue in a blizzard.

Work, in spite of the topsy-turvy weather, has been picking up steadily. I had a large ‘backlog’ of summer-flowering bulbs, so I have been slipping them into empty borders in all my clients’ gardens: nature abhors a vacuum and all that. With luck they will be a nice surprise for folk in a couple of months.

Lawns are still a no-go area though. It has been far too wet and/or frosty to deal with them as yet. I don’t want to leave it too long, or they will start to get too long even for a ‘high bladed’ first cut. Maybe it’s time to get the scythe out!

In the greenhouse I’ve been sowing seeds, but in moderation. Last year I planted lots early, and regretted it. We’re on our second lot of micro-greens already, and I have some tomatoes, chillies, lots of sweet peas, and sunflowers already underway. Some Blue Beans from the Heritage Seed Library are doing well, but my first sowing of Lab Lab (also from HSL) has failed. I’ll try another sowing when it is more consistently warmer.

My daughter Molly (3) helped to plant a batch of sunflowers and sweet peas which came from the marvellous Higgledy Garden. Their ‘Seeds for Syria’ mixed bag is well worth a look, and raises money for a very good cause. It’s sobering to think what some of the refugee children Molly’s age are going through, while she happily helps sow flower seeds… 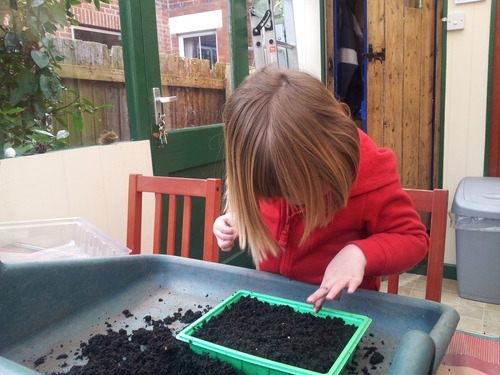 I moved out a number of perennials which had been sheltering in the (unheated) greenhouse over winter, and they seem to be doing alright, in spite of some mean-spirited frosts.

Up at the allotment, the main task has been giving the fruit cage a really thorough weed. It has been largely empty, save for a few raspberries, and is full of moss and weeds, including the ubiquitous couch grass. But careful hands-and-knees weeding is getting there, ready for a whole batch of soft fruit to go in – gooseberries, red and white currants, blackberries, strawberries and more raspberries. Once the weeding is done, it is on with as much mulch as I can muster, and then planting. There are some top fruit trees to go in at the allotment too in due course, probably in a row to create a bit of light shade/screening on the downhill side of the plot, which can be very exposed in summer.

I’ve taken on a new client who lives in the lovely-named Dorset village of Sixpenny Handley. Initially it’s a one-off ‘spring tidy’ job: but there is a detailed planting scheme which was done a while ago, and which I’ve been asked to look at with a view to implementing it. Should be an enjoyable bit of research, and – if it works out well – some useful work doing the planting-up.The garden is not large, but is very windy – sitting at the top of the village which in turn sits on a hillside – so that needs to be taken into consideration.

Oh, and I won a Twitter competition the other day: prize – a collection of Pumpkin Seeds, courtesy of Michael Perry at Thompson & Morgan. Guess what Molly and I will be sowing next…

How nice it is when a client thanks you properly for your work. I have only been working for Mrs W for a few weeks, and this morning she went out of her way to thank me for doing ‘such a careful and thorough job’. Lovely.

I do sometimes wonder that I am too slow and painstaking when it comes to jobs like weeding. But then I think, what is the point of weeding half-heartedly? The whole point of weeding, especially at this time of year, when weeds are striving to steal a march on other plants, is to get right on top of them. That way, there’s far more chance of staying on top of them through the growing season.

Pruning too. Mrs W has a fairly large Choisya ternata in the garden which has clearly been set about (I suspect by my predecessor) with shears in the recent past: leaving the top and sides full of ‘sticks’. A few minutes with the trusty Felcos and all that tatty growth was removed to behind the green growth, and the shrub looked leafy and healthy again. It will still need a proper prune when the weather turns a bit warmer, but for now it looks fine.

And a variegated Euonymus benefitted enormously from a few careful minutes spent removing yellowed stems and snipping the growing tips from plain green ones. Cutting the ‘plain’ growth out completely tends simply to stimulate it to grow – but stopping it in its tracks, then later coming back and cutting it right out, seems to do the trick.

It’s been feeding time too. I have been nowhere this week without my Vitax Q4, feeding shrubs and trees as well as turning it in on empty beds ready for planting. My RHS tutor swore by Q4, and I stick with it.

Summer bulbs have started to go in wherever there is space. I have loads in stock, and would rather they got a chance to grow this year than not. So I have been ‘guerrilla planting’ Alliums all over the place – my own garden, clients’ gardens and wherever. We will see what comes up…

I took delivery of an interesting apple tree this week. It’s not gone it at the allotment, as I have not been up there, but it will go next time I visit – probably over the weekend. It is a ‘Family’ apple tree (from Thompson and Morgan), with Cox’s Orange Pippin, James Grieve and Discovery all grafted onto a single rootstock. Maybe it is just a bit of a novelty, but the idea of having sensible quantities of different apples in due course is an appealing one. I have had enough of gluts of apples of one variety, without the means to store them properly or to make apple juice, let alone cider.

Finally, I am putting together ideas for an ‘Inclusion Garden’ at a local school. Intended to support children in developing their numeracy and literacy skills. It’s only 25ft square, but it does get the sun, so I am  keen to make the most of the space. First on my list was a ‘Herb Hopscotch’, as Dawn Isaac describes in her wonderful ‘Garden Crafts for Children’ – planted with low-growing, but sweet-smelling, Thymus.