Bertha did not really deliver much overnight here in south Wiltshire. It’s a blowy day, and there was a fair bit of rain earlier, but we’ve got off lightly as compared with other parts of the country. Rain, though, was much needed, as the past three weeks have remained extremely dry and warm. Getting back from Norfolk last weekend it was interesting to note how little the grass had grown in a fortnight, while a lot of herbaceous plants have already gone over in the heat.

Norfolk was, as it always is, a delight. I made my annual pilgrimage to Felbrigg Hall, in particular the kitchen gardens, which have changed a lot in the years I have been visiting. The herbs remain stunning, but the arrival of allotment plots worked by local people, and a general ‘relaxing’ of the planting regime, have made these wonderful gardens even lovelier to my eyes. 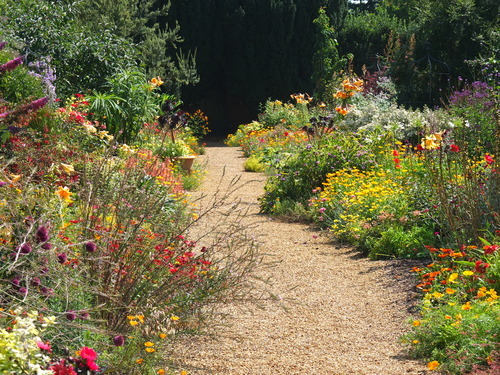 My first week back at work at The Manor involved two whole days of deadheading, tidying and weeding in the main perennial borders. Camassia, Crocosmia, Alchemilla, Delphiniums, Centaurea, Hemerocallis, Astilbe – all have had their time for this season, unless cutting-back inspires a second flush of growth in combination with helpful growing conditions. Hardy Geraniums had gone beserk, and I must have extracted several barrowloads of flowered growth which had spread outwards and upwards amongst other plants. Of course there were plenty of weeds too – some quite surprisingly large. There are, however hard one looks, always a handful that slip under the weed-radar and manage to attain a good size before they are noticed. Willow Herbs are the worst offenders, as they are both prolific and extremely fast growing; they can go from seedling to  two feet tall seemingly overnight. A couple of spots revealed Ground Elder, which was both worrying (as the garden is otherwise free of this most persistent of weeds), and also gratifying as they were easily dug out for now.

One or two stray plants also cropped up – even a scarlet Pelargonium had snuck into the border, where it had absolutely no place being. Other  plants had self set enthusiastically, notably Evening Primroses – which will flower shortly, and countless Digitalis. Many of these Foxgloves will stay where they are, but some might be moved around before they come into flower next year. 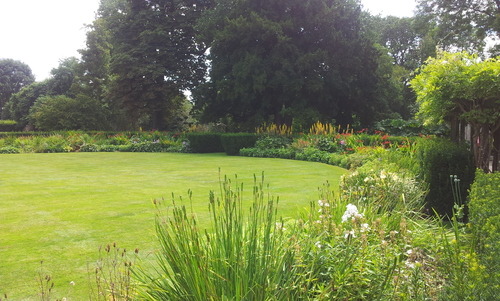 Herbaceous borders awaiting a tidy at The Manor

My work was accompanied by the plaintive mewing of Buzzards – up to three of them at one point – soaring and tumbling on the warm air above the garden. The Great Spotted and Green Woodpeckers were around as usual too, both of them very vocal but only the Great Spot glimpsed occasionally as it flew between trees. The Green Woodpecker has, I am sure, been attacking ants in some of the grass, but I have yet to catch him at it.

In other gardens, it was weeding and tidying time as well. I lost some Astilbes in one garden, as they had simply dried up and shrivelled for want of water in my absence. I hadn’t planted them but should, with hindsight, have moved them to a cooler and moister spot when I did the replanting earlier in the year.

A little chillier of a morning, and noticeably darker of an evening, it definitely feels as if the year’s turned now. My mother always remarks that ‘the nights draw in after Keighley Feast’ – Keighley Feast being the annual holidays in her native town, which took place at the end of July. But there is a lot of gardening left in the old year yet.