It was a bright, chilly, sunny walk to school this morning. What a change from yesterday, when the heavens let rip and rain came down aplenty. A morning to listen to birdsong – dunnock, robin, wren – and calls – mistle thrush, great tit, goldfinch – in the trees and hedges. A pair of carrion crows were chasing each other all around the large trees at the end of our road: I interpreted their enthusiasm as amorously inclined, but I might have been wrong. Jackdaws too were prospecting nest sites in amongst the chimney pots.

In the garden the snowdrops have already been and gone, but the first daffodils are showing, and there are some lovely Helleborus nodding in the sunshine. 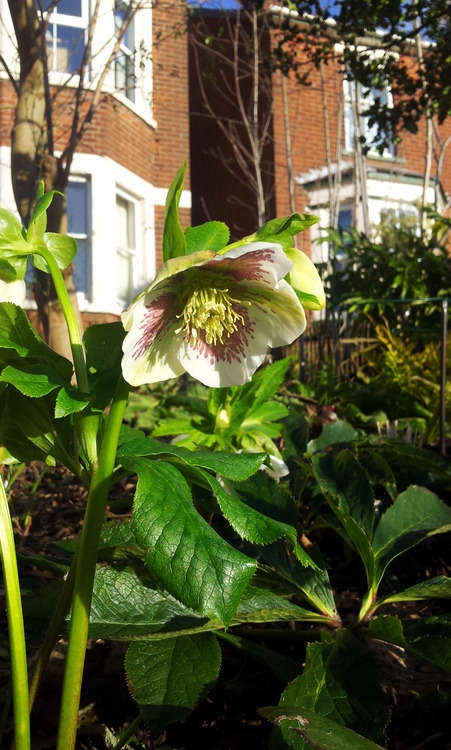 One of my favourite plants at this time of year is Dwarf Comfrey (Symphytum ibericum), which flowers enthusiastically and provides much needed early food for insects. 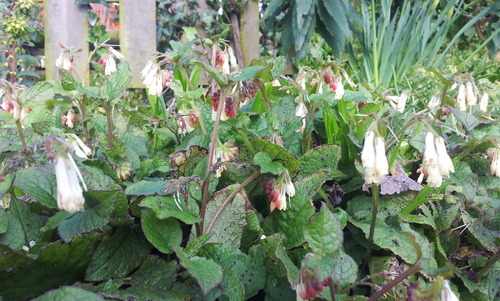 The flowers start as tiny pink-orange buds, before bursting into deliciously creamy white bells. It has spread along the path to the front door, softening the edging, and utterly smothering the previously ubiquitous Ground Elder (Aegopodium podagraria) – beautiful and useful: William Morris would have approved.

The seeds Molly and I sowed a couple of weeks ago (see my last blog) came up really well, and some of the young plants have already been moved into the greenhouse prior to potting-on from their seed modules. Pea ‘Meteor’ was very successful, with every seed germinating, as was Tomato ‘Black Cherry’ which will give me lots of plants – some of which will be heading for the plant stall at St Mark’s School when they’re bigger. We are planning to sell plants, and ultimately produce too, to make the school’s new allotment self-funding.

I have sown some other things over the last week or two – Comfrey (for the allotment), some salad leaves and radishes (‘Scarlet Globe’) in pots. As ever, the radishes germinated within 48 hours or so – no wonder they are such a good catch crop, and a useful indicator of where slower-growing seeds have been sown in the vegetable bed.

Now it’s sunnier and warmer my next job is to get the greenhouse emptied of plants that have been in there over winter, and thereby create more space for sowings and seedlings.

The days are noticeable longer now, as we head towards the Spring Equinox. Even though the weather remains at best unpredictable, at worst downright wicked, and clouds often seriously reduce the visible daylight, the sun is up for longer and longer each day.

Given that most folk’s gardens are fairly waterlogged, the lure of indoor jobs remains strong, especially on a wet day. Or, as was the case yesterday, when I have to stay at home on parental duty and look after a poorly 4 year old. Actually, a quarantined 4 year old – stricken with a tummy bug over the weekend, but fine now – still not able to return to school for 24 hours. (This is a standard and sensible precaution to keep bugs under control, though I have since learned that almost 25% of her schoolmates have had the same bug – so anyone who was going to catch it almost certainly has!).

We baked some buns, and we did some stickers, and we watched a bit (alright, quite a bit) of television… and then we sowed some seeds. It’s that time when one itches to be getting on with growing stuff, even though the ground outside is still too cold (and this year too wet).

My greenhouse is unheated, so I bring on early sowings in our ‘conservatory’ – or ‘garden room’ as I prefer to call it – a glass and wood extension at the back of the house, which becomes part of the kitchen in summer, but is too cold for eating in through the darker months. It does serve to house a heated propagator, and has lots of light so is good for getting seedlings going. We sowed Broad Beans (Bunyard’s Exhibition and Aquadulce Claudia), Dwarf Beans (Tendergreen), Peas (Meteor) and Tomatoes (Black Cherry): my daughter carefully filling the modules, and pressing in the seeds – good big ones like legumes being ideal for small hands; we licked our fingertips to pick up the tomato seeds individually. She also proudly wrote a large ’M’ on each label to indicate that these were seeds she’d been involved in sowing. Another advantage of the legumes is that they will – in theory – germinate quite quickly, so the eager calls of ‘have they grown yet?’ won’t need to be fended-off gently for too long. And there are lots and lots of seeds to be sown over the coming weeks…

The beans and peas will head for my allotment in due course, but most of the tomatoes (save for a couple for domestic consumption) will be heading for plant sales at my children’s schools. My son’s school – St Mark’s CofE Junior, Salisbury in case you’re interested – is starting an allotment, and we need to raise money to pay for some equipment, so these will raise a few bob. All the children have been asked to bring in seeds too – different year groups being asked for vegetables, flowers, wild flowers etc – ‘seed funding’ at its most literal!

I know I go on about the weather, but my heart does go out to people who’ve been flooded and risk losing homes, livelihoods and the rest. Salisbury is blessed with an ancient and still highly efficient system of water meadows (Eric Pickles take note), and we live on a hill well above the river level too. The underpass which leads to Waitrose might be flooded, and my income has taken a dent, but that is about the worst of it – many are much, much worse off, and have been for months now.