March arrived, and ironically brought the first frosts we’d had for weeks – there have been several over the past ten days: not hard but enough to whiten the lawn. Nevertheless, spring is definitely here, and we’ve had sunshine and warmth enough to really feel that the gardening season is underway. Kind and sympathetic folk have been telling me how I must be pleased to see the sun. Little do they know! I feel as though I have been in hibernation since before Christmas, and am only now stretching my cramped limbs and looking to the sky.

As a sufferer from SAD, I believe my mind and body would really like me to disappear into a cave sometime around late October, and to emerge again about now. Of course, modern human life doesn’t allow such – though I suppose our not-too-distant forebears (those before the advent of gas and electric lights) must have spent much of the winter in a state of quiescence, which might have been evolutionarily more appropriate. That they were also probably cold, hungry and frequently frightened is perhaps worth bearing in mind…

Anyway, to the garden. We have finally found a proper use for the great heap of apple and holly wood that has been sitting in the front garden for over a year now. ‘Let’s build a stumpery,’ I declared a couple of weeks ago – and I was, slightly to my surprise, greeted with not a little enthusiasm from my wife and son (my 4yo daughter was not bothered either way), So last weekend we did the deed. Having done some reading, and re-watched Toby Buckland’s segment about stumperies on ‘The Great British Garden Revival’, I felt reasonably clued-up. The spot chosen is a bit of ‘dead’ ground quite heavily shaded by a large apple tree, and up against a not very attractive fence. The ground was a mass of Solidago which has been left to run around in the absence of anything else, an old Buddleia globosa, and the stump of a long-departed Damson tree – oh, and an ornamental toadstool bought from the Larmer Tree Gardens a few years ago.

Having dug a decent pit, we put in some of the gnarlier hunks of root and half-buried them in soil, leaf-mould and garden compost. 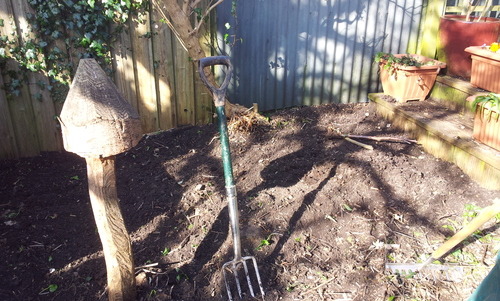 Preparing the ground for the stumpery

Then other logs were piled ‘artfully’ on top of them to create a pleasing, picturesque and suitably knobbly effect, before more soil and compost was poured in and around. An important point is to ensure that you create lots of pockets and holes between the pieces of wood – for planting into, and potentially for wildlife to inhabit (toads, stag beetles etc). 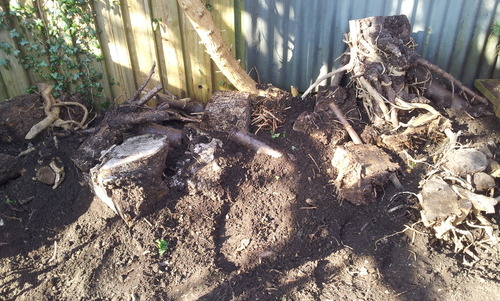 Some stumps buried, others starting to pile up

The whole thing was then watered, and left for 24 hours to settle a bit before planting-up. I used a mix of plants – ferns, which are the traditional stumpery plant, and woodland perennials. The ferns are a mixture of Dryopeteris, Polystichum and Asplenium varieties. 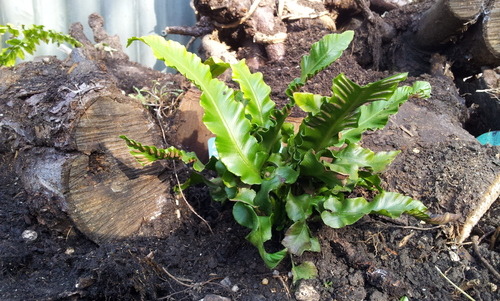 I had a couple of trays of small Digitalis left over from last year, so they went in, along with some Primroses and Galium odoratum which is a particular favourite of mine. There was some Gallium already growing where the stumpery has gone, so that might emerge into the daylight too if I didn’t root it all out. 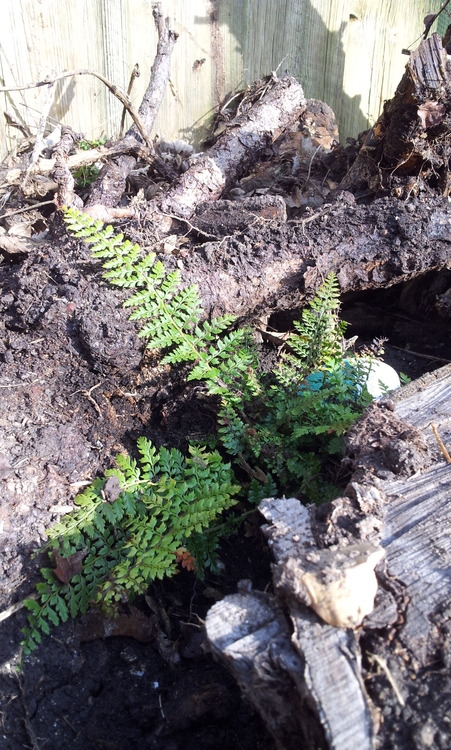 Another good water, and now we just wait for the stumpery to mature and settle into its place in the garden. Even 4yo Molly decided that – as the stumpery was near to her cabin – it might make a suitable dwelling for the odd fairy or magic toad. We shall see…