I have now worked two days at The Manor, my new and rather splendid garden. Not ‘mine’ of course, but the garden where I work half a week to help the owners manage six acres of formal and woodland gardens.

My first day, last week, was long and very, very wet. Within half an hour I was so wet that I could not get any wetter, and remained wet throughout the whole of a very, very wet day. Did I mention that it was wet? Too wet for anything but weeding, and even that was limited to avoid churning up and damaging areas of lawn and border. My main effort was concentrated on the Oriental Garden, which is covered partly in slate chippings, and partly in gravel. Both of these provided a reasonably firm surface to work from. I must have looked like I was searching for a murder weapon, as  I crept slowly on my hands and knees, extracting hundreds of sycamore seedlings with my fingers. Nevertheless, eager to prove my worth, I persevered and got not only the Oriental Garden, but also the main circular herbaceous borders, weeded.

Yesterday the sun shone, and the garden felt completely different. The ground was still pretty soggy – it had rained heavily again the day before – but conditions for working were infinitely better. I finished the herbaceous borders, having previously been unable to do the backs of them because of the wet. They are planted with a gentle mix of colours – pale blue chiefly at this time of year, especially a wealth of Camassia – with pink Persicaria waiting to enter stage left, along with Astilbe and Digitalis, all surrounded by a yew hedge and punctuated with neat balls of Buxus.  A handful of pale Narcissi are still hanging on – Sedum and Crocosmia will add to the show as the season progresses. 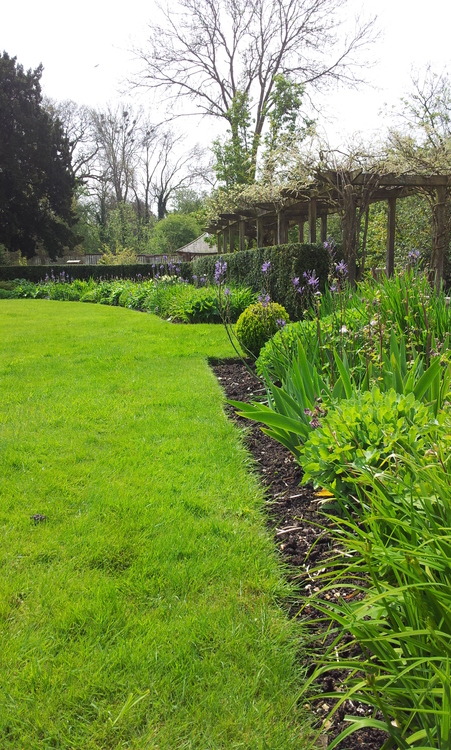 This year’s weed of the spring award has to go to Hairy Bittercress (Cardamine Hirsuta) which has clearly loved the conditions since last summer: it is ubiquitous. As the seed heads mature, they develop an amazing ‘firing’ mechanism which sprays seeds in all directions when they are touched. So much so that I sometimes wonder whether pulling the plants out is a counter-productive exercise: for each mature plant pulled-up, the seeds for 100 more are spread everywhere at high speed. I don’t know how fast the projectile seeds actually travel, but fast and hard enough to flick you in the face if you’re bent over them. Of course, birds or even the wind will do the job as well as any gardener – the trick is to catch the seedlings early, before the seedheads have matured.

That job done, and a quick sandwich eaten by the river which runs through the garden, I got on with mowing the Orchard. Large stands of naturalised Narcissus and Bluebells are still in full leaf, so needed mowing around: as the foliage dies back, and the goodness feeds into the bulb for next year, the mowing will become less complicated. Then the circular beds around each of the trees were weeded and hoed-over, and the long border along an old wall planted with espalier fruit was also worked-through, but not quite finished by the end of the working day.