I got a bit distracted by the previous post’s theme – a consequence of spending the day trying to restore order in the garden, and finding myself with repeated handfuls of soggy brown leaves to decant into my green bin – and went on a bit. Sorry.

The geist of the day, however, was good and productive. I managed to go through the greenhouse plant by plant, checking on a the many overwintering Salvias, Penstemons, Pelargoniums (shouldn’t that be Pelargonia?) – all of which were potted up in late summer, and all but two of which have survived. Indeed, several are thriving with the promise of cutting material aplenty in due course. Which does raise the question of where exactly I am going to put them all when they grow to maturity… 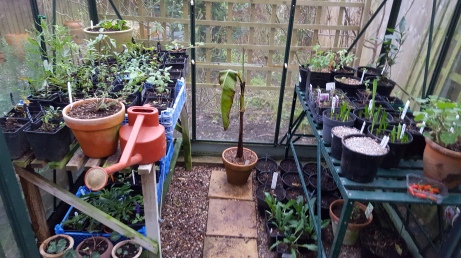 Inside the greenhouse after a tidy. The sad-looking Musa basjoo is fine, just resting over the winter like an ageing repertory actor.

I think they will fill the various pots and planters which are currently full of Narcissi and Tulips, queueing to flower over the next two or three months. Today I – very belatedly – potted up some Narcissus ‘Thalia’ and ‘Tete a tete’ from black plastic pots into presentable terracotta. They will join the others, planted back before Christmas, when they are flowering, and be placed around the garden to provide focal points of colour and interest.

The main herbaceous border was also a focus of my attention, as I cut back masses of dead and dying stuff. I pulled the plug on a scruffy old Solanum crispum, which used to live in a big pot on our decked area before that was torn up for the new shed. It’s never liked its subsequent location and neither have I – so into the green bin it went. At this time of year I always tend to plan an overhaul of at least part of the main herbaceous border – it currently contains far too much Lemon Balm, Tansy and Marjoram: three plants which are difficult to contain, and easy but fairly unrewarding. I didn’t have time to start clearing today, but their days are numbered. Kerria japonica is another plant I struggle to like – I’m not sure why I planted it in the first place – so it too was dealt with firmly.

One other greenhouse job was finally calling time on the chilli plants. I gathered the last few useable chillies, and then composted the plants. It is already time to sow this year’s chilli seeds, though I tend to grow a mixture of plants from seed along with a few I buy as plugs. The heated propagator isn’t set up yet, so the chilli sowing will have to wait for next weekend. A pot of Sweet Pea ‘Windsor’, sown back in October, has done very well in the greenhouse – strong roots are already showing through the bottom of the pot, and I pinched back the tops to encourage the plants to bush up a bit before I pot them on. 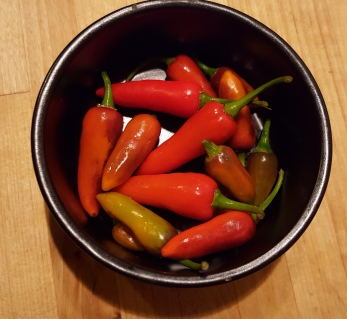 A final greenhouse task was to fit a new automatic opener to the roof light, the previous one having seized up. Although the greenhouse is unheated, ventilation is important – and equally, the south-facing greenhouse can get very hot on sunny days all year round. A fiddly and slightly irritating job, involving repeatedly dropped screws and a modicum of cursing, but it’s all up and ready for the next warm day.

Then, as the light began to fade, and the blackbirds started their dusk chatter, it began to rain steadily but softly. I took the cue, made myself a mug of tea, and sat to reflect on a happy and productive day, clearing the decks for the season ahead.

A mug of tea in the drizzle – feeling damp but contented.