At last, some dry days, and the opportunity to get on with work unimpeded by the rain. Yes, the ground has been made very wet and muddy by overnight downpours, but at least the days have brought nothing worse than the odd shower.

And the wet earth makes weeding so much easier. Even quite hefty dandelions and brambles have been happy to ‘come quietly’ with a good tug. Warm, damp weather such as we’ve had of late is, of course, a weed’s best friend – so there are plenty of them, but they are not putting up such a fight.

Which is more than can be said for the enormous rose bush I spent the afternoon dealing with today. I have no idea what variety it is, but it was a complete brute – huge thick stems, covered in brutish thorns, arching in an undisciplined web from an immense central trunk. If you know Edward Burne-Jones’ painting “The Briar Rose”, you will get some idea of what I was up against – though for me, there was no sleeping beauty within. The first task was to create enough space under the bush to be able to get in and work – then to trace which stems were dead, or so old and woody as to be unproductive, and cut those out with the pruning saw. Gradually, over the course of almost four hours, something emerged which looked like a rose bush – rather than a monster. 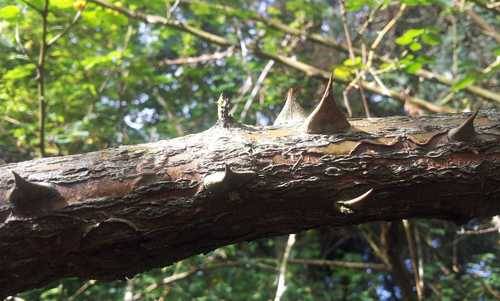 A clear and healthy framework was established, and enough dead wood removed to burn until Bonfire Night and beyond. Once all the leaves are off, I will do a bit more shaping, but the back of the job has been broken.

I did have a shock when I looked in my rear view mirror, as I turned the car round to leave the client’s garden – blood pouring over my forehead, congealed and vivid as Halloween face paint. Thank goodness I spotted it before I went to the petrol station. A large thorn even emerged from my scalp as I had a bath later in the evening. Those roses are a force to be reckoned with.

That said, there are dozens and dozens of roses in this client’s lovely garden – ramblers, climbers and shrubs countless varieties. Almost all of them need some thinning out and dead wood removing – work which will keep me going through the winter months: and which will reward my client, and myself, with a burst of floral magnificence over next summer.