Keeping busy, and enjoying the sunshine: though, as I write, the sky has turned a very unappealing slate grey.

Last weekend my 8yo son’s school project on the Romans took us to Fishbourne Roman Palace near Chichester, the first time I had visited. I was amazed to learn that this celebrated archaeological site was only discovered in 1960 – and that large parts of it have been covered by housing. Indeed, the approach to the Palace runs incongruously through a very ordinary housing estate. Nevertheless, what is visible is fascinating and very impressive indeed. The collection of mosaics in the North Wing is stunning. It is haunting to think of generations of Sussex farmers ploughing the site, turning up – as they must have done, some mosaics bear the damage of ploughshares – squares of coloured tile, but never guessing what was beneath their feet. Had they been found earlier, a greater extent of the Palace would have been explored no doubt. On the other hand, the best mosaics might have been removed to the British Museum or the Ashmolean, or into private hands, and their interpretation by 18th or 19th century antiquarians would not have yielded the information given up by a late 20th century dig. Had they been found earlier still, I imagine the mosaics might have been broken up completely, and the tesserae used to decorate local buildings or even Chichester Cathedral.

Which reminds me to note the sad passing of Professor Mick Aston, late of Time Team, who died this week. He was only 66 – which means that when Time Team began he was only in his forties: and yet he always seemed to have the look of an eccentric, kindly and aged academic – all wild white hair and stripy pullovers. A bit like the Professor in the Rupert stories…

One unexpected highlight of the trip to Fishbourne was the garden, planted with Roman plants in a quite small but formal and ‘authentic’ way, based on archaeological evidence from the site, and classical sources such as Pliny. 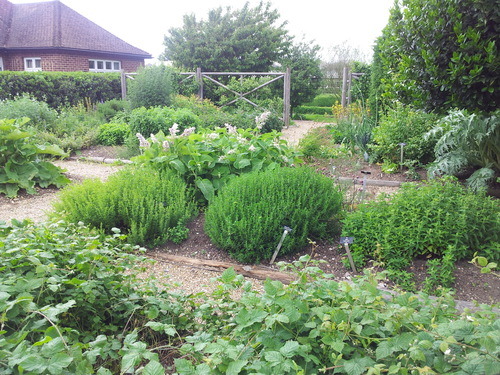 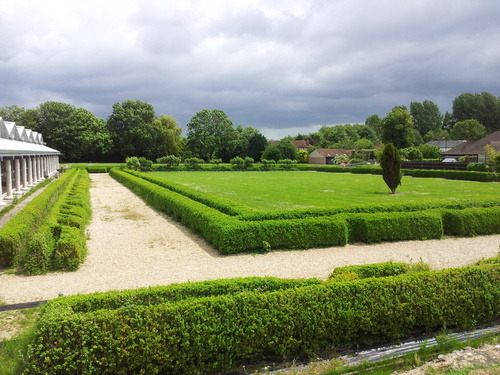 The box-lined central courtyard, and a lone Cypress tree

There is even a gardener’s shed, with a commentary from the gardener himself, grumbling about the weather (inevitably) and the shortcomings of Chichester’s climateas opposed to the growing conditions of his native Italy. Acanthus, fruit trees, vines, box hedges are all known to have been grown by the Romans here, along with classic mediterranean herbs such as oregano, thyme and rosemary. Interestingly, Ground Elder, that most famous Roman horticultural import, was noticeably by its absence.

I came away wondering whether I could create a similar ‘Roman garden’ on my allotment – poor soil and exposure to baking sunshine (sometimes!) would certainly suit many of the herbs. I have done monastic and Elizabethan gardens before – though not at the allotment -so this would probably be fun. 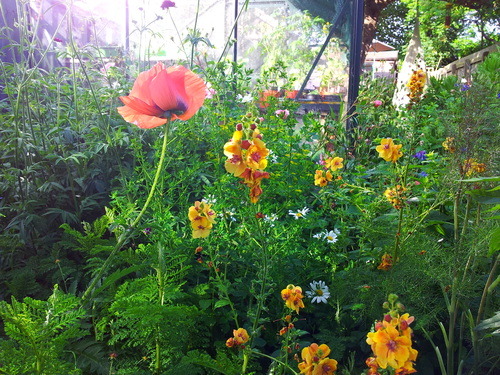