Apologies – as ever – for my failure to blog lately. No real reason, just a combination of things. One of which was Easter, and a lovely week in the Lake District. We stayed, with two other families, at YHA Windermere: which is a slight misnomer, as it is actually in Troutbeck and about 3 miles from the village of Windermere itself. However, its position several hundred feet above Lake Windermere, with amazing views west over towards the Coniston Fells, is fabulous. The terrace, bathed in some long-awaited late-afternoon sunshine, pint of Jennings’ Bitter in hand, was the place to be at the end of a cold, bright Cumbrian day, with snow glinting on the distant tops. The bird table was consistently thronged with Great, Blue, Coal and Long-tailed Tits – along with Robins, Dunnocks, and Blackbirds – just six feet from where we were sitting.

Everyone at the Youth Hostel was great, and the children were treated to the run of the wonderful grounds – extensive, hilly, wooded and full of wild den-building opportunities. This is definitely a venue to recommend.

Back in Wiltshire, the gardening year continues to move at a lethargic snail’s pace towards something that might properly be called ‘Spring’. There are a few flowers showing in the garden – pots of Tulipa ‘Purissima’ have opened in the past day or two, a beautiful pale creamy-yellow. 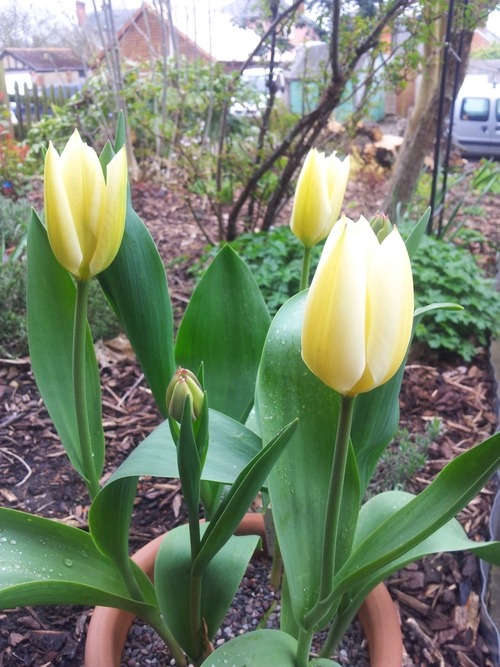 There are some ‘Queen of the Night’ in the same pots too, which are later into flower, and a fabulous deep maroon. They should, in due course, pick up the colour from Heucheras and Ajuga in the adjacent border. Otherwise, the front of the house is full of creamy-yellows and deep blues at the moment.

But generally this season is a very slow affair. Forsythia, which would normally have been and gone, is still coming, and Daffodils are still in full bloom. Nevertheless, it is warmer, and wetter, than for the past three months or so – and there have been some spells of warm sunshine. 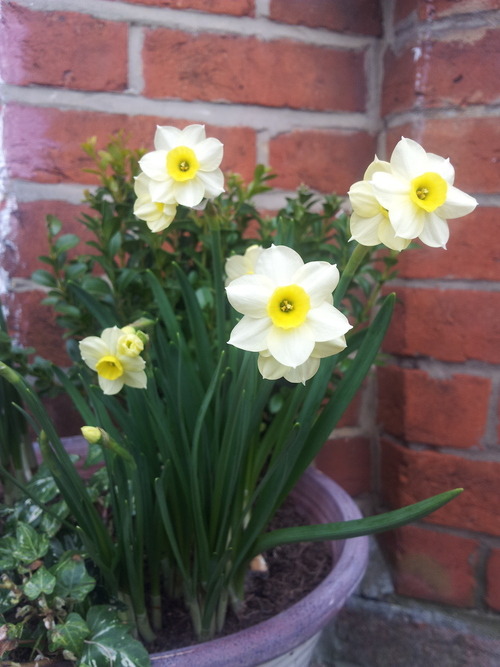 Other people’s gardens are moving equally slowly, of course, so it’s sometimes a question of finding ‘maintenance’ jobs to do once all the ‘seasonal’ stuff’s been deal with. Lawns are getting some extra care this spring – though cutting remains a hit-and-miss business, entirely dependent on the vagaries of the showers (which seem to have a sixth-sense for me getting the Mountfield into the van). 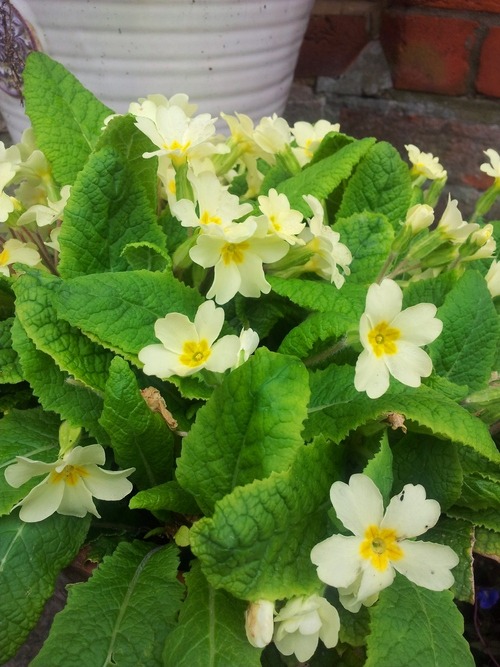 I have seen Swallows this week in central Salisbury, and there was a Chiffchaff calling loudly when I visited the allotment early this morning on the way back from the school run. The allotment is yet another scene of delayed activity, the ground still too cold for sowing. A fine crop of rhubarb is flourishing though, on the edges of the manure heap dumped back in the autumn. It’s salutory to notice how the soil levels in the raised beds, which were brim-full after a pre-winter mulching with manure, have dropped over winter. They will need bringing back up again before plants start to go in: I just hope that not too much of the goodness from last autumn has been washed away.

There is a definite sense of spreading green in the borders after each new shower, so we are moving forward, albeit about three weeks behind a ‘normal’ year, we are at last.